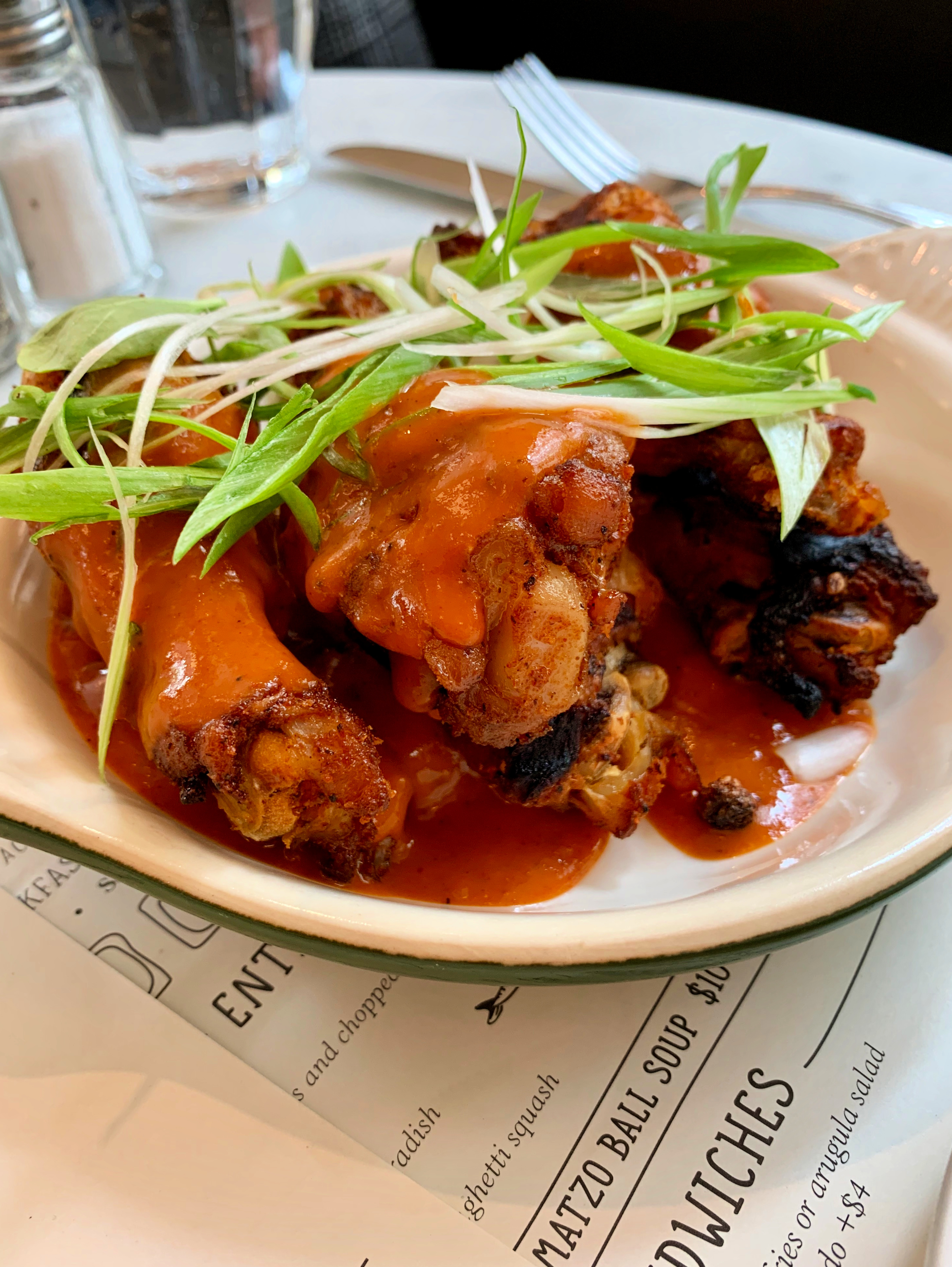 Don’t get me wrong, I love an entree, but when I’m craving a snack, nothing gets my mouth watering like an appetizer or a small plate. These peri peri wings from NYC’s Jack’s Wife Freda are a delicious blend and spicy and hearty, with a rich depth of flavor that always has me wanting more.

First off, what is Peri Peri exactly? Lots of things – lots of spices, that is! The collection of traditional Portugese spices translates to “pepper pepper” in Swahili. It’s seen it’s share of travels and interpretations, making it’s way from Mozambique thanks to the Dutch East India Company, along with influences of chutney and samosa from India, and curry from Malaysia. The Oxford Dictionary of English defines piri-piri as a very hot sauce made with red chili peppers”, and gives its ultimate origin as the word for “pepper” in southern Mozambique.

Why I Love Them:

With all that being said about Peri Peri being fiery, the Peri Peri wings from Jack’s Wife Freda will not fireblast you out of the building. One of my pet peeves about hot wings at a lot of other places is that often they’re hot for the sake of being hot, rather than having any depth of flavor. That’s not what happens here – instead you’ll find yourself savoring and examining the flavors in your mind (not to mention scouring the ingredients in the cookbook of the same name) while relishing the nuances of allspice and brown sugar that give it a sweet, savory, spicy flavor. These wings have been given some thought… tasted and tested and perfected. My only wish is that there were a few more in an order! 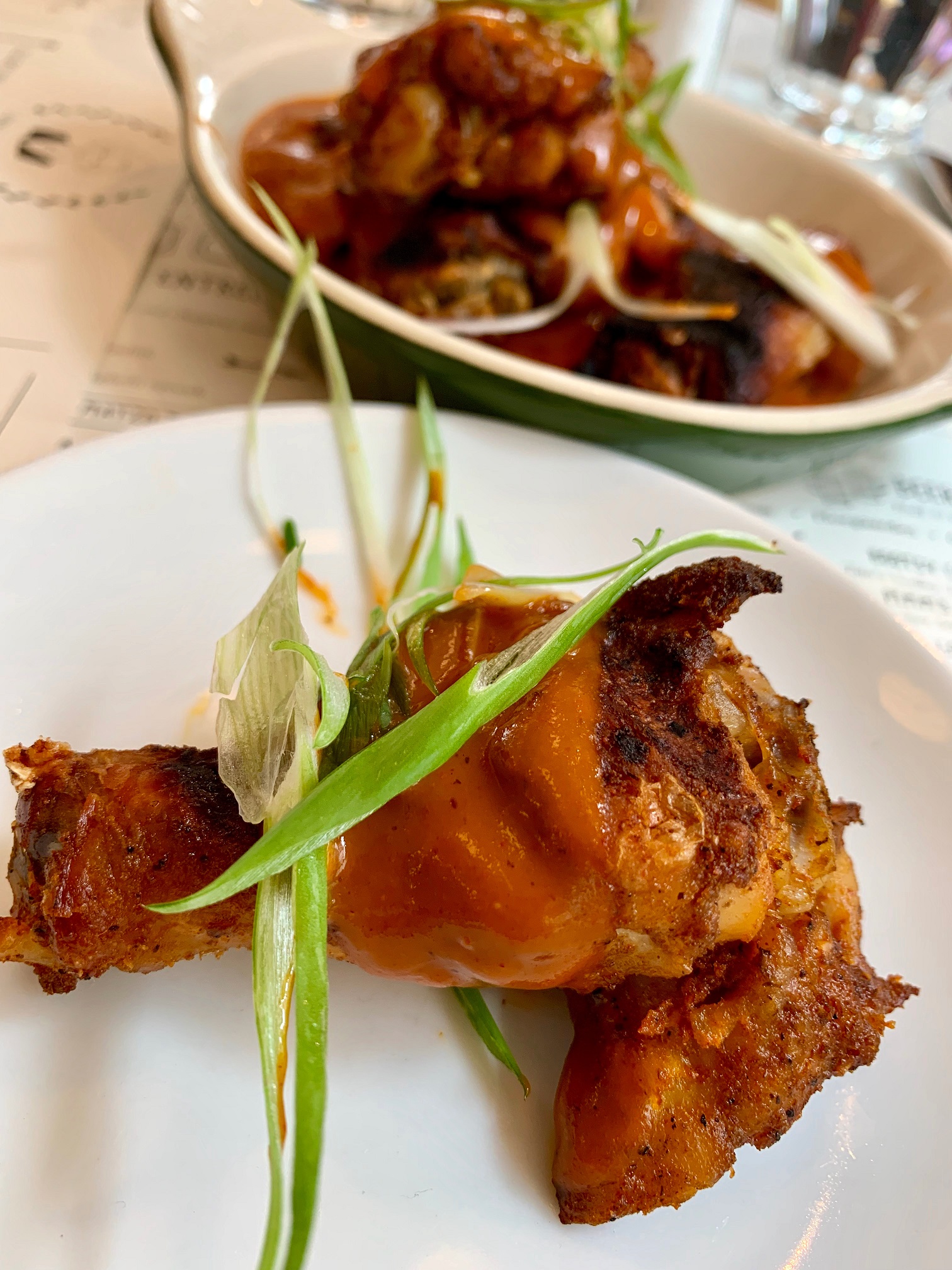 While you can make this yourself thanks to their cookbook, why not just go to Jack’s Wife Freda?

Jack’s Wife Freda is an immigrant love story, times two. Freda and Jack met and married in Johannesburg circa 1930. They had two children and a handful of grandchildren. Their grandson Dean dreamed of the America he saw on TV, and as a teenager packed his few belongings and began his great adventure. In 2003, life took yet another turn, and he met Maya. She too had emigrated to New York to find that special something. Sparks flew, and another immigrant love story was born. They were married in Maya’s homeland, Israel, at their spiritual center of the Western Wall. 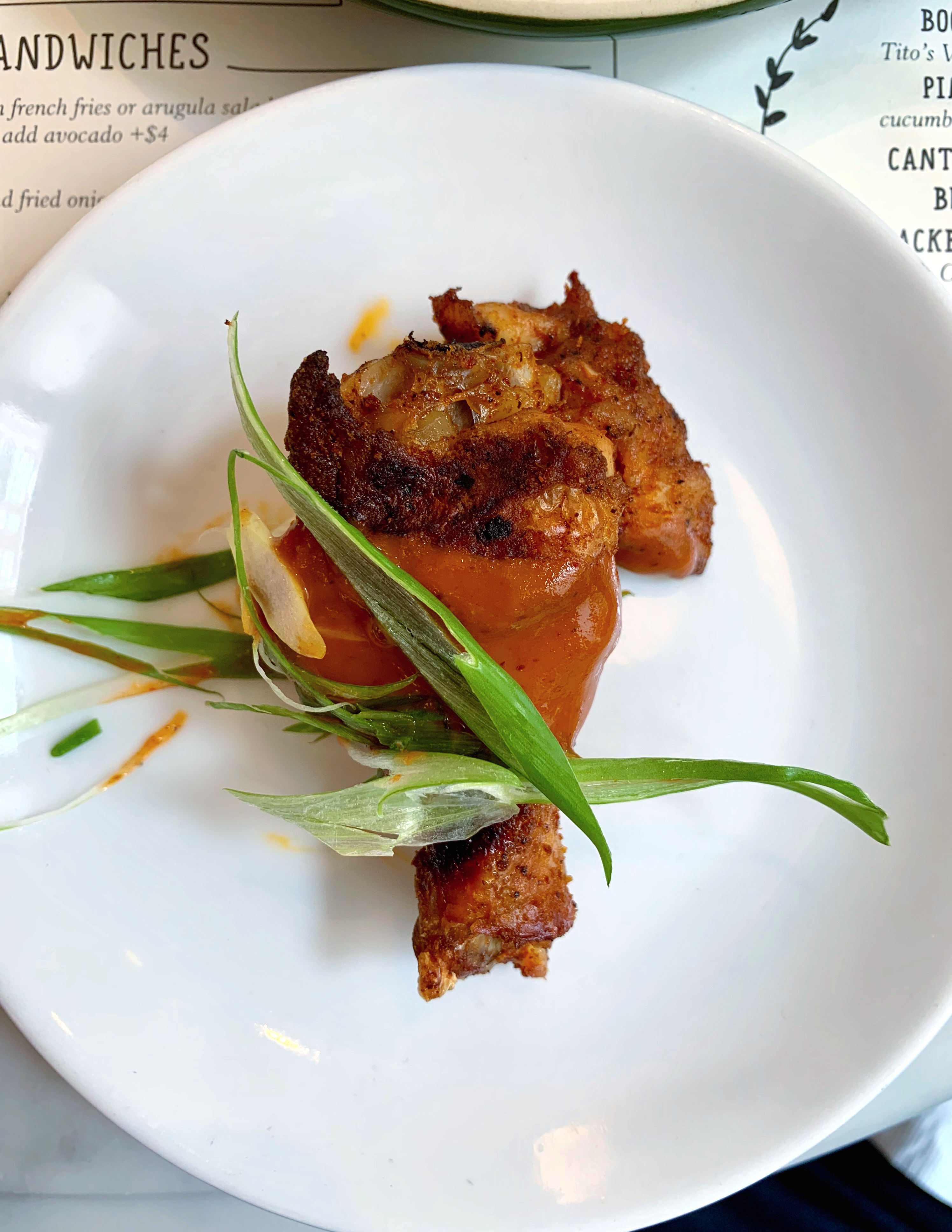 Dean and Maya Jankelowitz apparently met at the Soho restaurant Balthazar, (which doesn’t bias me in the least, despite that being my last name). Their food is often referred to South-African-meets-Israeli-Jewish-comfort-food. But all you need to remember is one thing: their food is delicious. If you’re in one of their three NYC locations and want something bigger than the must-have wings, definitely check out the scrumptious Chicken Kabob (also seasoned with peri peri spices) with cous cous and chopped salad, and the Madame Freda, a breakfast sandwich (breakfast is served all day) with duck prosciutto, cheddar bechamel, gruere and a sunny side up egg.

SNACKS AND THE CITY: Balvanera’s Fresh Take On Burrata Is Worth Snacking On

SNACKS AND THE CITY: Finally, The Inside Scoop On The TAK Room Creamsicle I’m Obsessed With 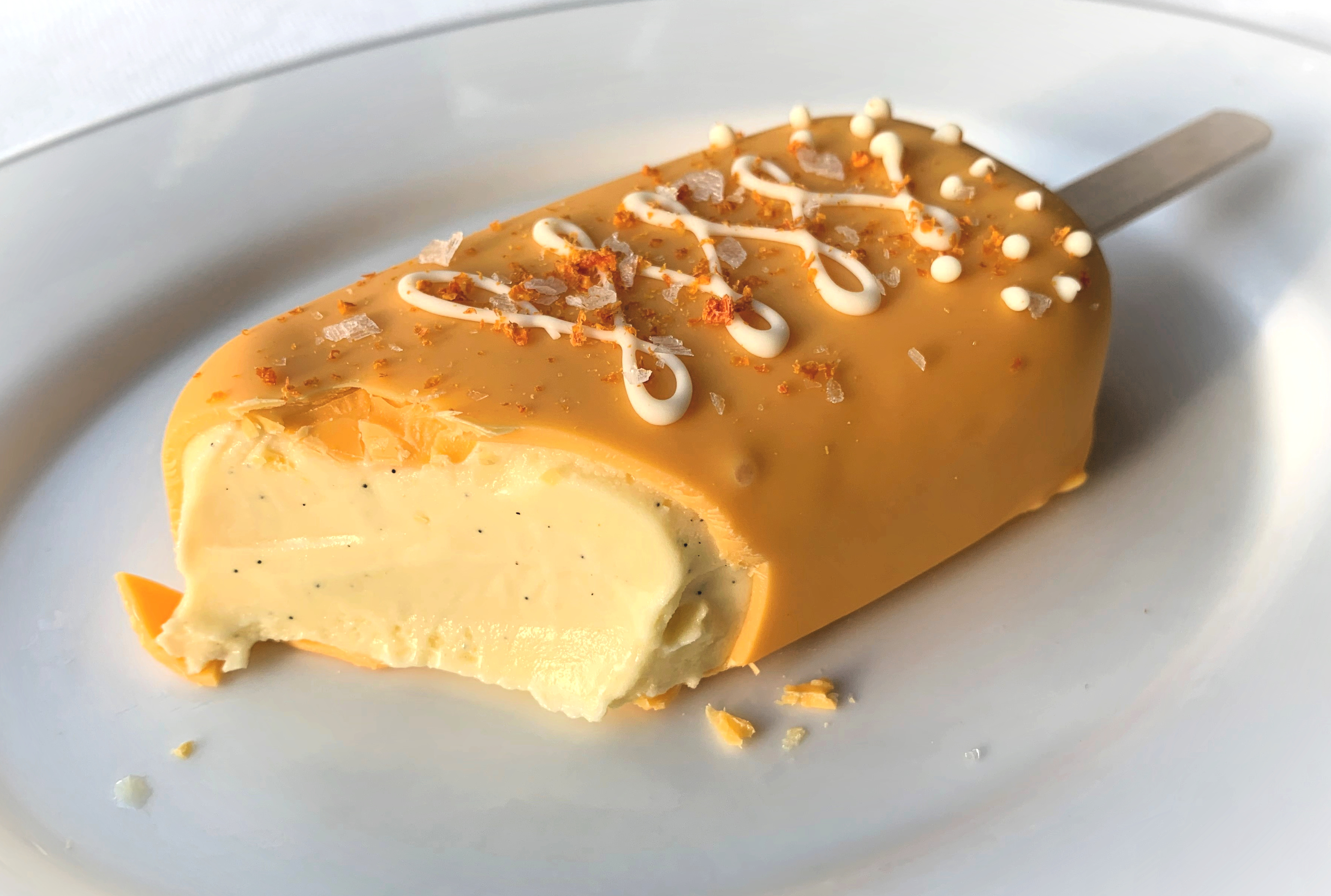 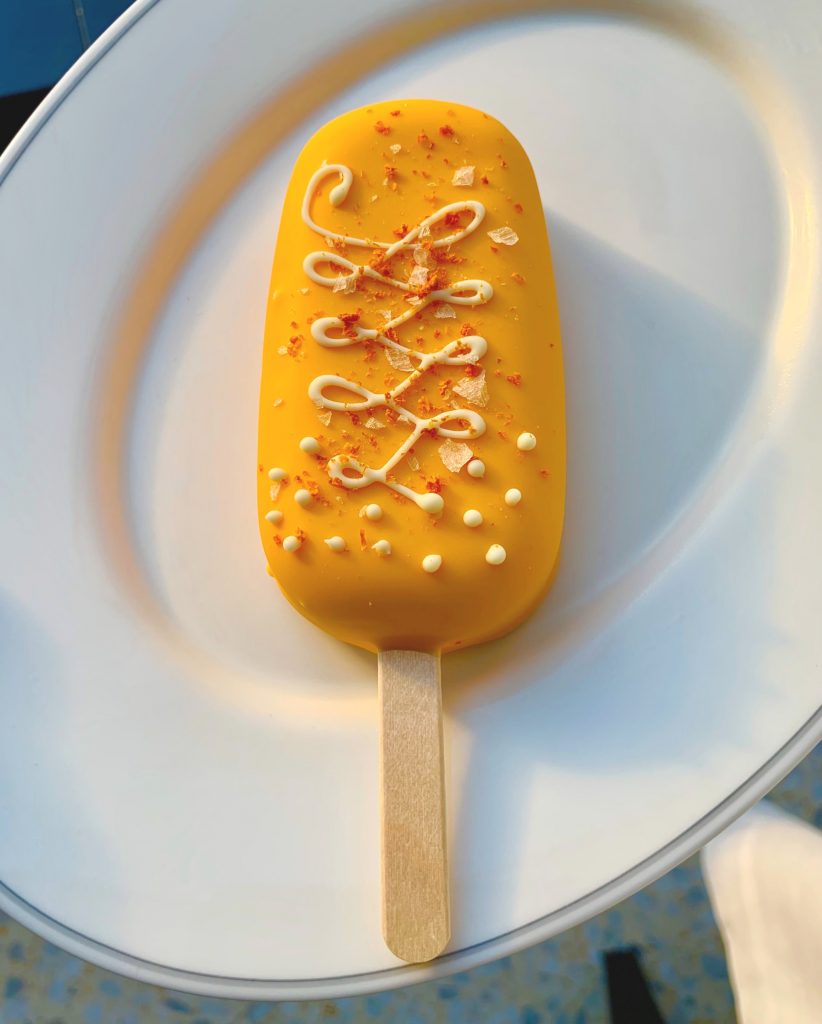 Now I finally know what goes behind the secret dessert I dream about.

Hidden within Hudson Yards is a new favorite of mine…Chef Thomas Keller’s TAK Room. I went to dinner there back in May, and honestly, it was not just some of the best food I’ve had, it was the service that was truly above and beyond expectation.

The restaurant is high end, to be sure, so I was wondering what I would be able to bring to the Snackist website that would be unique, tasty, and snackable.

Well, I found it – but it wasn’t on the menu! A creamsicle inspired dessert that looked – and tasted – scrumptious, but there was only the server’s verbal explanation of what went into it – it wasn’t described on the menu or the website.

Until now. Thanks to their twitter feed, a detailed look at what goes into this memorable treat that is as beautiful as it is sweet and delicious. And not surprisingly, there’s a lot of time and thought that went into this:

Vanilla Ice Cream, infused for 24 hours with orange zest, and Orange Sorbet made with Cara Cara, Valencia, and Navel Oranges, held together in a white chocolate and cocoa butter shell.

Take one bite of this dessert and you’ll know it was prepared with such care. It has a depth of flavor you’ll want to take your time with. I know people have a tendency to order desserts and share them, but honestly, don’t make me share this. I’m not capable of this level of kindness.

If you’re looking for a splurge worthy dinner, definitely head to Tak Room – check out their menu here! And definitely save room for THIS dessert!!!

SNACKS AND THE CITY: Catch Yourself Some Truffle Sashimi 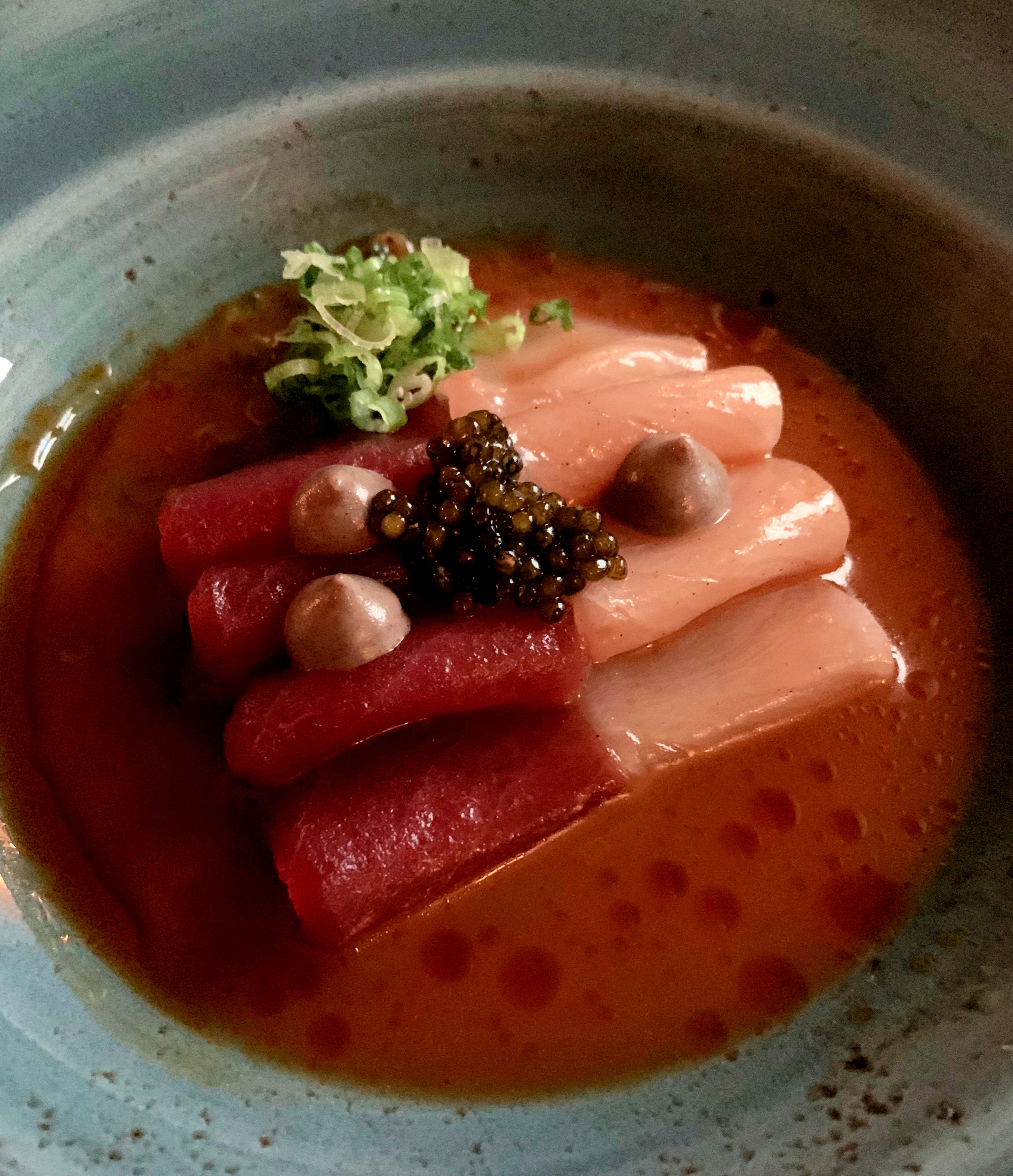 Sometimes the words on a menu just don’t do a dish justice.

I’d be hard pressed to find something on the menu at Catch’s meatpacking location that I didn’t think was amazing. But sitting right there on the top of the ‘Cold Plates’ menu is an item that would easily get lost in the sea of great choices – a “Truffle Sashimi” ($33) that lists its components as Tuna, Hamachi, Chili ponzu, caviar and black truffle puree.

IT. IS. HEAVEN. Catch specializes in seafood that’s tender and fresh, and that’s the foundation of this dish. But a lot of people may not be fully read-in on some of the other ingredients, so let’s break it down.

Tuna and Hamachi – you know fresh sushi grade tuna, but you may be less familiar with Hamachi. Hamachi – or Yellowtail – is often described as a ‘sturdy’ fish similar to tuna that is caught primarily with hook and line and weights between 10 to 20 lbs. It is mild, smooth and sometimes even described as buttery. It has become a staple in restaurant appetizer menus where it is thinly sliced and complemented with jalapeno to interchange the smoothness with the heat.  BTW – According to Inland Seafood, some sushi bars grill the skeleton and the bits of meat left on it as a little snack. (Um, no thanks.)

Chili Ponzu – Ponzu is a citrus-based sauce that’s a staple in Japanese cuisine. It’s used as a marinade, as a condiment, an addition to soy sauce, you name it. Rice wine, rice vinegar, bonito fish flakes, seaweed and an infusion of yuzu fruit is added. Yuzu is in the family with oranges, grapefruit, lemons and limes. Other Japanese citrus fruits are also added. You can buy this in stores, but who knows what magic Catch is adding to theirs. That’s what’s pooling at the bottom in the photo and in this particular case it leans closer to the sweetness from the fruit than the sourness of the vinegar. The ponzu in this dish hits just the right balance.

Caviar – great caviar isn’t as salty as what you’ve bought in stores because it’s super fresh. Catch is all about freshess, so this caviar is mild and flavorful, slightly salty and adds beautiful texture.

Black Truffle Puree – truffles are the fruiting portion of a fungus. They are treasured like diamonds in the world of cooking for their flavor and for the arduous nature of harvesting them. Their flavor is described as a mix of nutty, earthy and a bit mushroomy. In this case it’s pureed and dotted on top of the dish.

This dish may feel small but it’s a healthy portion as a starter – or for me, a snack. (It’s great for sharing.) It might seem high at $33 for one order, but the taste combinations are unforgettable, the dish is smooth, sweet and savory all at the same time, and if you’re treating yourself to dinner at Catch anyway, this is a must! 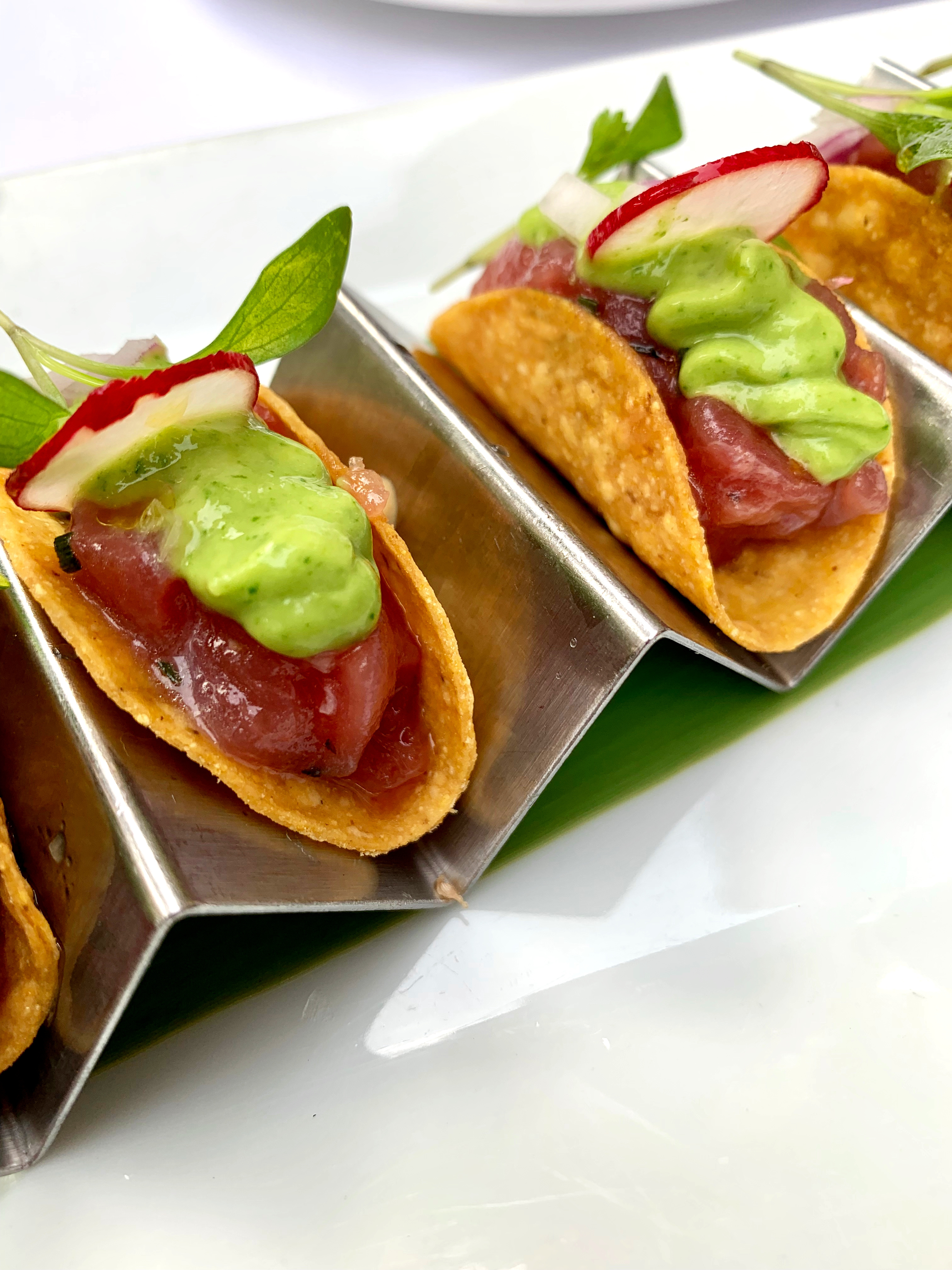 Right in the heart of Rockefeller Center in NYC, the perfect bite of fresh yellowfin tuna, jalapeno aioli and crunchy tortilla awaits you.

It’s easy to get overwhelmed looking for a place to have a bite in the Big Apple. So many places, so many menus. Where to go? What to order? Brasserie Ruhlmann is one well worth a visit for the mini yellowfin tuna tacos appetizer in of itself.

Sitting innocently on the ‘bar food’ menu, these bites are perfect for a light afternoon snack to get you through the hour or two before dinner. (Or order dinner here, for that matter, you won’t regret it!) 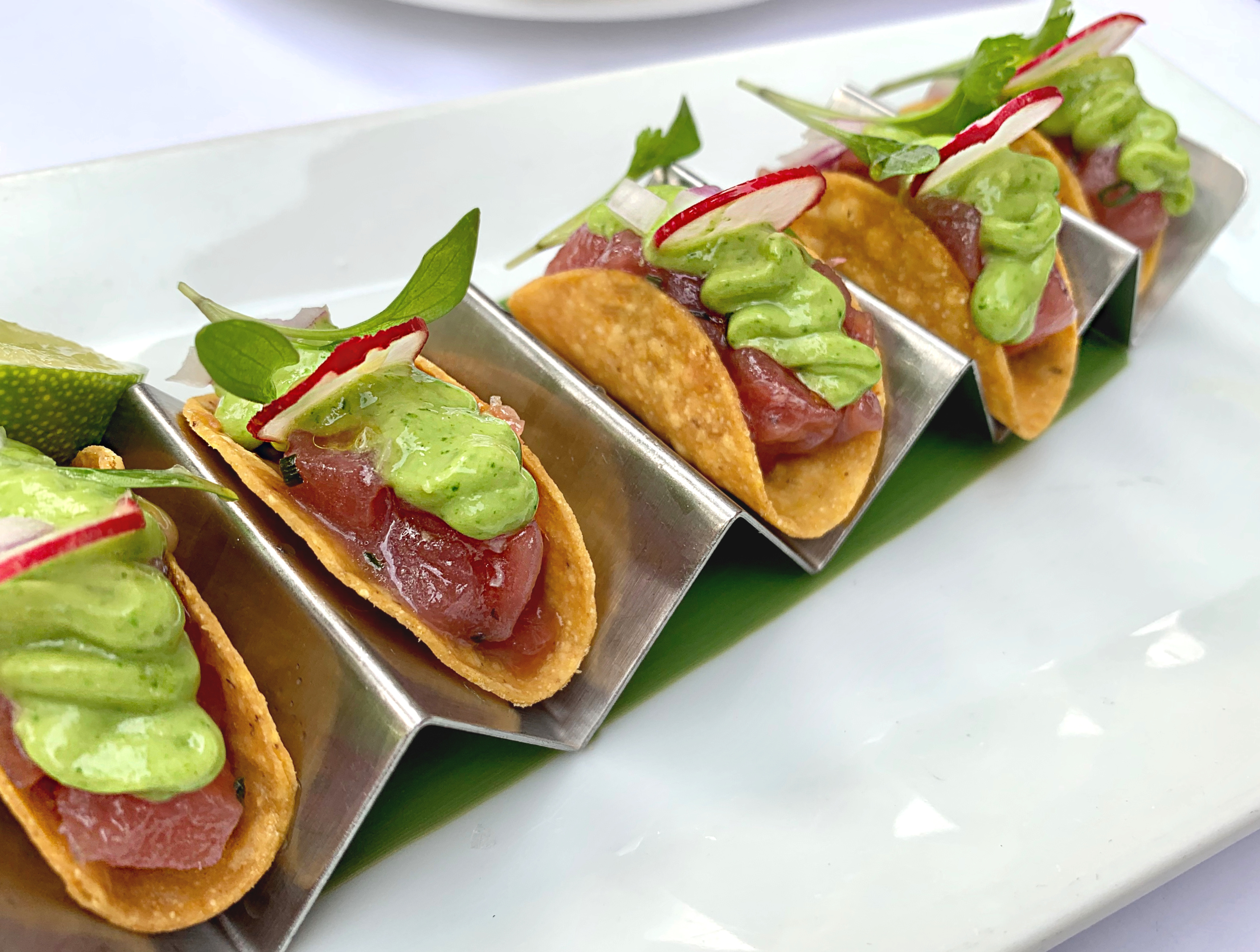 Tiny taco shells are stuffed with just the right bite of yellowfin tuna, a jalapeno aioli, (which I initially mistook for a creamy guac sauce upon first glance) thinly sliced radish and a splash of lime at your own discretion (do it!) are perfect with their spicy jalapeno margarita. (I like mine with mezcal.)

Yearning for more than a snack? Definitely consider their Lobster Roll or Sweet Corn Risotto with Poached Lobster. … Wow. It’s WOW levels of delicious. Or steak frites because French restaurant.

These would be fun to make at home, provided you find fresh sushi grade tuna. Incidentally, miniature taco shells like these are virtually impossible to find in stores, aside from the popular line of ‘Scoops’ you see in the chip aisle, which are good, but don’t have the legit look or ‘adorable’ factor that the real thing provides. If you’re really hankering for something mini in a taco shell, you’ve got to check out MiniTacoShells.com, which likely finds the bulk of its customers from the restaurant and catering industry, as they sell not only tiny shells but also the serving trays to serve them on.

Ruhlmann is one of those places that often deserves to be more crowded than it is. Why not stop by and grab a table!